Normally, all of the leaves are down in my adopted hometown of Durham, North Carolina by Thanksgiving, a week from now.

Judging by how full of leaves many of my 60 deciduous trees are, we may miss that benchmark but I wonder what a fly-over by the Carnegie Airborne Observatory (CAO) would reveal?

According to Dr. Greg Asner, principal global ecology investigator for the Carnegie Institute of Science at Stanford University: 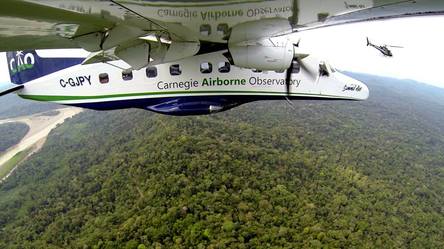 That is all ships, trains, airplanes and automobiles combined.”

The CAO is a Dornier 228 aircraft equipped with sensors, lasers, spectrometers and 3-D imaging, and of course, scientists working to learn more about the building blocks of the ecosystem.

None too soon, an insert arrived with my water bill yesterday reminding people not to blow or rake their leaves into the street, but to either utilize them or put them out for yard waste collection, steps often missed by less professional lawn services.

We already have a lot of metrics on the value of trees including forests along roadsides and in urban areas.  Multi-agency groups such as Trees Across Durham are attempting to execute a strategic approach to implementing a 12-step national multi-agency call to action launched two years ago called Vibrant Cities and Urban Forests.

Here, they are challenged with reversing a nearly forty-year period of neglect which saw trees surrendered to impervious surface at a rate that outpaced population growth by 8-to-1.  Deforestation in Durham over that period has been the equivalent of more than entire 8 city lots in my neighborhood which would be nearly 800 trees per day.

One day, initiatives such as Trees Across Durham will benefit from an aircraft such as the Carnegie Airborne Observatory.  Until then, they need our collective will to rise above these five obstacles: