Being Inconsistent With Community Values

This is an excerpt from BullCityMutterings.com, a blog written by Scenic NC President, Reyn Bowman.

If they could pull the wool over the eyes of the local chamber of commerce, I suspect it wasn’t too difficult to trick the police department where I live.

But a city agency lending credibility to roadside billboards in a community overwhelmingly opposed to them illustrates why citizens must never become overly reliant on the judgment of public servants to defend the community’s values.

With a sense of irony, I suspect, the local newspaper’s print version ran directly under one asking residents to be sure to keep trees healthy by watering them during dry spells and between issues lamenting the demise of a historic tree and lauding its repurposing at a local museum.

Billboarders do everything possible to clear cut trees, including recently denuding a stretch that screened a city greenway from a highway, probably emboldened because it ran through a poor neighborhood.

Neighborhoods that recently fought hard to preserve Durham’s billboard ban will still support the cause.  After all, this is just one of several publicly funded agencies to flaunt their disregard for this community value.

Enabling qualifies as flaunting even if born of obliviousness.

Even though by 9-to-1 Durham residents support the community’s ordinance banning billboards including, I presume, at least four of the residents depicted on this one, neighborhoods here will try to overlook the faux pas in support of a good cause.

But research shows ill regard will accrue more to the agencies involved than the billboard companies donating the space as part of a strategy to prop up their reputation.

Nationally, only 1-in-6 Americans even pay attention to billboards now which is why researchers measuring their distraction to drivers must now study roadways before and after they are erected to detect their devastating impact.

Billboards now appeal to fewer than 1-in-10 consumers, making the claims of some state elected officials that they are good for campaign donations, I mean the economy, puzzling.

Fewer than a fifth of one percent of consumers buy something based on billboards.  Consequently, even 24-out-of-25 marketers now shun them.  Those who don’t, have yet to connect this practice to their company’s social responsibility and sustainability policies. 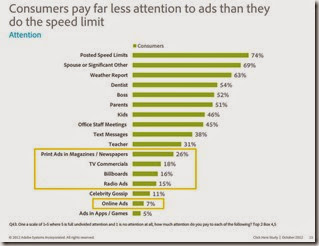 Still, why would public servants paid by local tax dollars be oblivious to city ordinance, let alone the opinions of more than 7-out-of-10 Durham residents?  Or the fact that the billboard’s use will insult 7 residents for every 1 who may find it appealing?

Why take that risk for such a negative return?  Frankly, I doubt it was given much thought, let along any strategic review.  Lest any administrator or elected official who isn’t defensive try to point the finger, let us look at why they need to look in the mirror instead.

The fact is, many who make such decisions are not strategic thinkers by nature, let alone concerned with aligning decisions with overarching community values or even metric-driven decision making.

It is the same reason so many in my former profession of community destination marketing are able to swear to be guardians of community sense of place and then hypocritically sanction billboard blight by their use elsewhere.

Consistent support of community values, I presume, is why Durham’s DMO not only avoids the use of billboards but discourages their use by peers because of the desecration they create.

Far too many truly experienced marketers fail to grasp that generating awareness is not all about “turn-on” but must net out the “turn-off” factor, including the medium used.

Even advertising during the Super Bowl comes at the price of turning off more viewers than the ads engage, proving that ego often trumps smarts.

Of course, in Durham, it would be too easy to lay the enabling of blight, such as the decision to use this billboard, off on non-residents who now make up 2-out of-3 people working here, including the majority working for local government.

Even if that is the case, someone living in Durham let it pass.

It is no wonder that public servants nationwide struggle with being strategic, when economists estimate the time horizon, on average, for issues debated by those in high office is now “six months or a year at most.”

A communications audit conducted in Durham during the mid-1990s recommended that the two local governments and public school system greatly expand and centralized both their communications staff and capacity to better serve the public and reduce mixed messages both internal and external.

The city, at least, paid attention and for a couple of years moved toward implementation but then while still light years better, quietly slipped back into a more fragmented, dispersed and underfunded approach resulting in inconsistencies such as the use of this billboard.

The importance of coherent messaging consistent with brand values often distinguishes high performing organizations.  But it is often lost on large organizations where it is even more critical as evidenced by the huge fines being assessed on super-banks right now, much of it due to poor messaging.

Especially when it comes to governments at any level, both external and internal communications are undermined by constant turnover or undervalued and under resourced by both management and/or governing boards at the expense of achieving alignment and synergy.

Bringing back a 100+ year old tactic, the North Carolina General Assembly recently reduced the state’s appeal by several notches while drawing national ridicule by outlawing the use of climate change science for decision-making along the state’s coastline.

Nationally, this approach traces back at least a hundred years, when Republican Presidents began executing new legislation creating forest preserves which ultimately led to creation of the National Forest Service.

Unable to repeal the popular effort fronted by Idaho Senator Weldon B. Heyburn, special interests prevailed on allies in Congress, also in control of Republicans, to instead just choke off funding for the new agency.

But far more significantly, Congress also voted to prohibit the new agency from communicating in any way with the American public.