This is an excerpt from BullCityMutterings.com, a blog written by Scenic NC President,           Reyn Bowman.

A comprehensive survey of litter across America in 2008 published a year later showed an estimate, by weight, of 5 million tons.

But that metric is less and less relevant.  Litter simply weighs less today.

That’s also why it is so difficult to believe it has been reduced by 60% since 1969 when the push intensified nationwide to curb this form of blight, including billboards, a legalized form.

Plastic overall contributed nearly a fifth of the litter stream back in 2008 but because of the proliferation of plastic bags and other types of plastic film, the next survey may need to find another metric other than weight.

That report also signaled that surveys focused primarily on roadways are no longer enough.

Other forms of litter declined by anywhere from 74% to 88%, but plastic in the litter stream has jumped an incredible 165%.

An even greater amount is now blighting areas other than roadways.

These off-road parts of the litter stream include transition areas to roadways, loading docks, construction, recreation and retail areas, urban and rural streams and other waterways (as shown below off Fish Dam Road in Durham near a tributary flowing into a reservoir here used for drinking water down in Raleigh.)

In streams and waterways is where plastic bags have become especially ubiquitous, threatening drinking water and even our oceans where they “form large, swirling, glue-like collection zones” in “gyres” comprising as much as “40% of the planet’s ocean surface.”

Having no local government agency fully accountable, places such as Durham where I live, rely instead on volunteer clean up efforts along urban and rural waterways here. 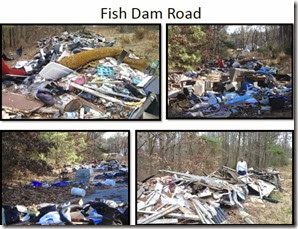 But no amount of volunteer passion can work without agency capacity in the interim, just as no amount of capacity can make a difference without public servant passion.

Public education efforts fail because they aren’t targeted.  Some are fearful of the apparent links between littering as a behavior, lack of education, smoking, depression, obesity, parenting style, poverty and drug use because it may reflect poorly on various groups.

This may be why those involved in cleanup steadfastly refuse to involve forensics or law enforcement to trace origins of litter.

Plastic film such as plastic bags is as light as it is ubiquitous.

This volume-to-weight ratio undermines its inclusion in far more scalable curbside recycling because judging from Madison, Wisconsin, it takes a year or more to collect enough in communities the size of Durham to have a full truckload.

Retailers such as dry cleaners, grocers and general merchandisers, 18,000 outlets in all, now provide recycling barrels for plastic bags.  They can do this because they merely back-haul them in returning delivery trucks and then forward this critical mass to recyclers specializing in turning them back into more bags and film or decking.

Still, while accessible by 70% of Americans, it represents only 18% of recycled plastic film, with curbside another 3%, as of a report on 2012 released this year.  This is only part of the 141 million pounds of consumer-returned plastic bags and wraps returned for recycling.

If the free market was efficient, the cost of cleaning up the bags that are not recycled would be built into their per unit price to recompense businesses and government units overwhelmed by the problem.

But the market isn’t that efficient and billions of dollars in costs are passed off on other businesses and taxpayers.  Because policy-makers are so fearful of anti-tax groups, as is often happening now, the bags clog storm drains, water ways, blight neighborhoods, suppress property values and threaten public health and wildlife.

Anti-tax enthusiasts are essentially believers in the idea of a free-lunch, a dole for the free market.

They tie the hands of officials to clean this sh*t up, leaving the cost of what little removal is done added to the cost of doing business, which gets passed along as higher prices for goods and services, reduced property values and public health.

The question is can we afford these zealots?

Of course, these are the folks who rolled their eyes at the news recently that policy-makers in California have prohibited much of the 14 billion plastic bags handed out by retailers there each year by banning their use in grocery stores and large pharmacies by 2015 and convenience stores by 2016.

According to USA Today, it also allows grocers to charge 10 cents for paper and reusable bags and provided $2 million in loans to help manufactures shift to a new model.

The loans make sense based on a report this summer that paper bag recyclers are moving into the recycling of plastic film such as plastic shopping bags.

The approach of banning post-consumer use is patterned after the success of similar bans by cities and counties.

Nationwide, Americans go through 110 billion single-use plastic bags a year, about 60 per family for every four trips to the store.  It has only been since 1982 that grocery chains began the shift to plastic bags.

Now we use about 60,000 every five seconds, much of which makes it into the litter stream along roadsides and in streams and waterways.

There will be some equally negative—if less visible—trade-offs.  If paper bags make their way into landfills instead of being recycled, they create more harmful greenhouse gases, breaking down faster than plastic bags which break down slowly.

Banning sales or distribution of plastic poop bags to clean up after pets will mean an increase in the toxic wastes in parks, beaches, businesses and the yards of innocent homeowners, not to mention storm runoff and contaminated drinking supplies.

No, all poop isn’t equal when it comes to microbial load.  A recent study along beaches for example have found that 1 dog “fecal event” was equal to nearly 7,000 bird “fecal events,” the next largest animal source.

Two or three days of droppings from a hundred dogs is enough to shut down watersheds within 20 miles to swimming.  That’s a hell of a lot of microbial load.

As long ago as 1978, researchers in Massachusetts found that dog feces alone were sufficient to account for devastating closures of shellfish beds there.

A single gram of dog poop can contain more than 23 million coliform bacteria.  Even if people choose to use their own yard as a sewer, in a place such as Durham where each acre receives between 1 and 1.5 million gallons of water each year, it becomes a matter of public health concern for the entire community.

But other than making plastic bags water soluble and toxin free, what other option is there than to restrict their use?  I know they exist because I had to order them one year when we lived in an apartment and my dearly departed English Bulldog, Toady, developed Alzheimer’s.

In a fair world, only the 10% of Americans (including 15% of Republicans, 8% of Independents and 6% of Democrats) whose rabid anti-tax-ness hollows out the capacity to deal with problems such as this would suffer from the diseases and complications brought on by their shortsightedness.

But the world isn’t fair, nor is the free market sufficient until such time that it comprehensively incorporates “full-cost” accounting.