This is an excerpt from BullCityMutterings.com, a blog written by Scenic, NC President, Reyn Bowman.

Deep in the appendices of a study scientists conducted along the nation’s roadsides in 2010 is an estimate of how many acres of forestland is along roadsides in North Carolina’s portion of the National Highway System.

Not counting roadsides along forested state highways or all of the rural roads it maintains in each of the state’s 100 counties, just the 28% of the NHS portion still with roadside trees alone means the North Carolina Department of Transportation is in the forest preservation business.

Or it should be.

This is 7% of all state and local government forestland.  I suspect it is would be closer to 30% if an inventory were conducted of roadsides along all NCDOT-maintained roadways.

And that is just the point.  NCDOT has no boots-on-the-ground inventory of this asset, nor a strategic management plan of caring for this publicly-owned commons.

This is why there is typically no reality-based fiscal note provided when legislators vote to surrender this public asset free to out-of-state billboard companies, including no requirement to reforest taxpayer trees when destroyed merely for a few more seconds of face time.

It is also why there can be no cost compared to benefit when contractors with mechanized assets push to remove thousands of acres of trees unwarranted by federal maintenance guidelines.

NCOOT regulators know that merely using the miniscule value as “pulp” has long-ago been antiquated as forest service scientists over several decades have meticulously documented the far greater value of the trees to ecosystem services such as reducing harmful emissions.

Long ago state officials were given a heads up to scores of other types of valuations including the role of roadside forests as the signature asset both for tourism, a sector now adding an incredible $10 billion to the state’s GDP including its appeal to scouts for relocating or expanding businesses.

It wouldn’t be expensive for NCDOT to conduct a tree inventory using just the 200 randomly selected plots of 1/10th acre each required by i-Tree Eco technology created for this purpose by forestry researchers.

Plots selected by random would include ones in various regions of the state and population intensities as well as terrain and vegetation cover, including areas with no trees areas as well as views worthy of scenic preservation and those where blight is screened. 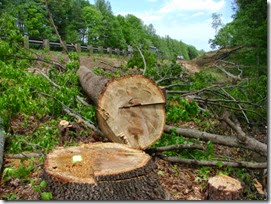 Outputs would also provide a baseline for the number, age and health of trees along the roadsides including the percentage of each species and overall management needs.

It would also quantify the overall value calibrated top local climates and other variables.  Officials need only contact Dr. David Nowak, the research forester who created the process and who patiently broke it down for me during a phone conversation last year.

Here is an example done of street trees by the Virginia Tech Department of Forest Resources using i-Tree, but NCDOT might be able to add to its considerable resume for best practices by being the first agency of its type to conduct such a roadside assessment statewide.

It took the feds nearly a decade to sign agreements for implementation with all fifty states after the Highway Beautification Act was signed on October 22, 1965, a herculean effort by the agency that today rarely even lifts a finger to enforce it.

North Carolina officials like to claim that forestland acreage here today is about the same overall as was in the 1930s.

But that disguises the fact that it had been much higher when it peaked in 1964 as the HBA was being debated in Congress. Since then, forestland has also declined precipitously (p. 4) in North Carolina.

It has also declined dramatically since 1971 when business leaders helped encouraged voters here to pass an amendment to the State constitution in part meant to protect forestland such as that along public roadsides (Sec. 5, Article XIV.)

Emblematic instead, is that those sworn to uphold it simply don’t, with newly enabled sacrifices of forests along roadsides and soon interchanges, which is pushed only by lobbyists today on behalf of parasitic commercial billboards.

But following the embedding of that amendment in 1972, state officials let another million acres of public forestland disappear, prompting cities such as Durham in 1984 to enact billboard bans in self-defense, followed by protective scenic overlays along new Interstates and in 1999, ordinances to protect tree canopy in general.

Yet, here too, local officials have failed to follow up with an inventory of this signature symbol of sense of place, a powerful prerequisite of any strategic management of green infrastructure while “billboarders” and their legislative allies press to override three decades of local effort to be more appealing.

While more than 8-in-10 North Carolinians – and an even greater proportion of visitors – are reverential about forested North Carolina roadsides, they are easy to take for granted.

Much of what we see today has grown back in the last 50 years.  As the HBA was passed, there had come to be a billboard every 1500 feet nationwide along highways (imagine seeing one every city block.)

Durham, North Carolina had had enough and enacted a Republican-led ban that year while many other communities in North Carolina and across the state succumbed to heavy-handed lobbying, graft and threats instead.

However, after the very highest courts sided with Durham, the state sided with the billboard lobbyists.

Today, the feds look the other way when it comes to enforcing the Highway Beautification Act enabling billboard companies to push through phony rezoning.

It isn’t enough that North Carolina has once again permitted enough billboards to be put up along U.S. highways here alone to be the equivalent of one per city block, but a legislative give-away recently enabled them to triple the cut zone forgoing a million or more  publicly owned trees.

And yet, there is no inventory of the forests the public owns along roadsides or any holistic estimate of the value of roadside forests’ worth, including tourism, although according to public opinion polls, they are priceless to Tar Heels.

In the meantime, as any use of billboards by consumers to buy something had fallen now to “two-tenths of one percent,” lobbyists are readying a push with legislative allies to force communities, even with those with bans to permit digital billboards.

Sound like reasonable stewardship to you?  Or maybe it is time for a moratorium to preserve North Carolina’s scenic character, while it still has some left!