This Is An Excerpt From BullCityMutterings.com, A Blog Written By Scenic, NC President, Reyn Bowman.

Rarely, by the time news gets back to Durham, North Carolina where I live, does it provide more nuanced coverage of this complicated region including news of studies that run counter to those narratives.

Studies I’ve been reading, including one that analyzes the 284 non-metro counties in the west as a whole where there are substantial amounts of protected federal lands, are fascinating.

One study zeroed in on those with lands protected for conservation and analyzes non-metro, county-level economic performance in these places from the present to, in some cases, back as far as the 1970s.  Others analyze the performance of a all 413 counties in the 11 contiguous western states.

The current wave of anti-regulation rhetoric dates not to the 1960s regulations to protect water, air and the food supply or when the EPA was created as many assume or the anti-government rhetoric used by the Reagan administration but not shared by the American public in the 1980s.

The anti-regulation chant of today has its roots in 1947, when partisan post-WWII Republicans resumed the drumbeat of how regulations are a burden regulations are on business, while dismissing that without them an even greater burden is shouldered by individual Americans. 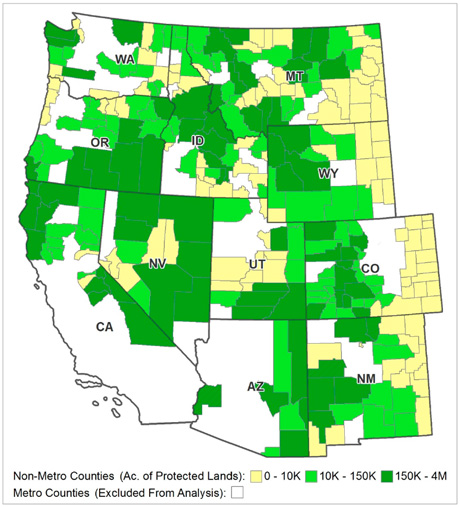 I was born and spent my early years during this period in a million acre- Idaho county wedged into that nook between Montana and Wyoming.  Only 31% of the land area was in private hands such as our ancestral ranch just west of the Henry’s Fork.

More than 58% of Fremont County is under federal protection on behalf of all Americans including a portion of Yellowstone National Park and the Targhee National Forest.

To put this in perspective, the amount of federal lands in my native Fremont County, Idaho is 3.6 times the land area of Durham County, North Carolina where I live but with only 3% of the population.

Only 67,642 acres of the more than of Fremont County is protected for conservation purposes and relevant to the study of all 284 non-metro counties in the west with such lands.

The studies were done by the independent, non-profit, non-partisan Headwaters Economics based in Bozeman, Montana, up and over the Continental Divide and 150 miles north of our ranch where my parents eloped as my dad headed off to WWII.

The study was conducted to determine if these projected lands were associated with decreased or increased economic performance.  The numbers show that performance is higher for every 10,000 acres of protected federal land a county has.

Between my junior and senior years of high school, I read A Wilderness Bill of Rights by Supreme Court Justice William O. Douglas, who grew up along the eastern slopes of the Cascade Mountains in Washington State.

Appointed when he was just 40 years of age, his time on the highest court spanned from when my dad was in high school until my law school days.

His words transformed my spiritual and restorative feelings about nature into an entitlement for all Americans, as important as freedoms of speech and religion.

It had a profound impact.

Five years after Douglas retired from the high court, as President Ronald Reagan was elected, the news media, made the mistaken assumption that his popularity meant that his anti-government rhetoric must be widely shared, amplifying partisan news releases.

But both the news media and publicists were mistaken.  Polls following the election showed that only 21% of Americans shared that notion, about the same percentage as in 1976, possibly contributing to approval ratings for Reagan that several years later dipped into the 30% range.

It is the same today.  Americans don’t share anti-regulation rhetoric when the consequences become clear even though the term regulation has been sequestered and demonized my entire lifetime .

Campaign strategists then and now were brilliant, seeking not to sway public opinion but to make certain words radioactive such as environmentalist, federal government and taxes, creating a political correctness that distorted the self-perception of Americans.

It still gridlocks us today.

I much prefer to look at analysis of the actual numbers, not because they will change anyone’s mind but because they provide relief.

Oh, and by the way, studies show that non-rural counties in the west that are exploited for natural resources, actually in the long term suffer economically.